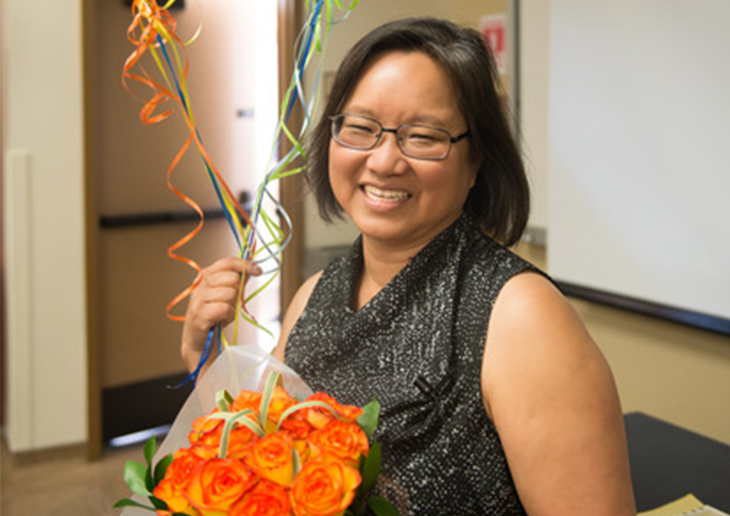 “Students need to know that there are many jobs that are satisfying and fulfilling and that can make you a great living if you love science.”

On March 5th, Fullerton College Biology Professor Dr. Jo Wen Wu was honored by the Association for Career and Technical Education (ACTE) as the 2018-2019 California ACTE Post-Secondary Teacher of the Year, during the organization’s Educating for Careers conference in Sacramento.

Every year, ACTE’s “Excellence Awards” are given at the state, regional, and national level to honor recognize excellence and dedication within the field of career and technical education. Wu’s accomplishment means she will now advance to the regional awards, which will be announced in April.

No stranger to educational honors, Wu’s CV reads like a reference list of teaching awards. In 2013, she was added to the UC Irvine Educator Wall of Fame and that same year won Fullerton College’s Club Advisor of the Year Award. In 2017, she received the California Hayward Award for Excellence in Education and the Orange County Science and Engineering Fair Educator of the Year Award. She’s also been selected — not once, but twice — for Teacher of the Year honors at Fullerton College.

Despite her many accomplishments, this new accolade is special.

“This award makes me proud because this is for career and technical education,” says Wu. “It is different for me because I have been trying to promote careers in biotech for students for so long. It’s nice to know it is kind of working.”

As Wu’s students would attest, “kind of” is a significant understatement.

A first-generation immigrant, Wu arrived in the United States from Taiwan after her father, who was studying engineering at Kansas State University, was targeted by the Chinese government. Anti-governmental protests by certain U.S. chapters of a Taiwanese student club had led to the Chinese government “blacklisting” all of the club’s chapter presidents. It was only through the help of a U.S. Senator that Wu, her mother and brother were allowed to seek political asylum and join her father in Missouri.

There, Wu’s lack of English language skills, coupled with the fact that she was doing math at a sixth-grade level, led to much confusion over what classes she should be placed in. An independent course of study was settled upon, which suited Wu just fine. It would give her the freedom to develop an abiding love for science fairs and, once her English was good enough, give her the time to read all of the books in the children’s section at the local library. That’s right… all of them.

In high school, the precocious Wu met Dr. Ernestine Long, a mentor who would have a profound impact on her life.

Long, one of the first, female chemistry Ph.D.s to teach in Missouri, had developed an assessment for identifying female students who showed potential in the sciences.

“I was invited to be a part of one of her summer research programs,” says Wu. “My friend and I visited her frequently through the next two years, and she really mentored us. She really encouraged me, pushed me and wanted to make sure I went to college.”

Wu eventually did, securing a full-ride scholarship to the University of Missouri at Columbia.

“Even though my mom was bright, she was barely allowed to finish high school,” says Wu. “So she couldn’t really show me the way. My parents were supportive about my aiming for university but did not discuss how to pay for education. I was lucky to have full-ride scholarships for both my Bachelor and Doctoral degrees.”

Today, Wu’s unique background has had a significant impact on the way she teaches. She is keenly aware of the challenges facing female, ESL and minority students, and firmly committed to mentoring students of all backgrounds who are interested in the sciences.

“I love knowing that I’m helping students learn something that is practical. Something that will help them get a job or start a future career,” says Wu. “They’re like I was. They just need someone to show them which way to go and how to get there.”

For Wu, the “way to go” is biotechnology and life science.

One of her many contributions to the field is the Orange County Biotech Education Partnership, which connected with industry advisors to develop a stackable, biotech certificate and degree pathway that is now being offered at Fullerton, Irvine Valley, Santa Ana, and Santiago Canyon Colleges. Depending on the school, these programs can lead to occupation-based certificates in Biomanufacturing Technician, Lab Assistant Skills, Laboratory Technician and an AA in Biotechnology.  Students can then transfer to Bachelors degree programs at two community colleges, as well as multiple programs at CSU, UC and private universities.

“Students need to know that there are many jobs that are satisfying and fulfilling and that can make you a great living if you love science,” says Wu.

Despite her deep investment in the success of her students, Wu is not an “easy A.” While she is an entertaining lecturer who integrates “toy” models into her lectures to convey complicated concepts, she also demands a lot from her students. For example, every student is called on several times in every class to answer direct questions about the material being covered.

“They’re totally intimidated the first week, but by the end of the class they understand why I do it,” says Wu. “They can’t hide in my class and that’s important because no matter what they go on to do, they have to be able to express themselves, communicate their ideas, and think on their feet.”

Inspired by her own early love of science fairs, Wu also started a summer science camp, which over the last seven years has offered 35 week-long sessions for middle- and high-schoolers. In addition to giving students hands-on experience in a college lab setting, the camps also provide an entire year of mentorship to younger students.

“I brought in my Fullerton students to serve as TAs and mentors,” say Wu. “Many of the camp students are first generation, so now they have had a chance to visit a college and meet someone who they can ask questions and who might become a role model for them.”

As for the future, Wu is excited about expanding a regional, high school, dual-enrollment program in biotechnology which will begin accepting students from 7 high schools next year. She is also looking forward to the possibility of moving the Biotechnology department, which has 850 current enrollments, into a new space at Fullerton College in the next decade.

The key to her teaching success? You might be expecting something highly scientific and technical, but you’d be wrong. For Wu, you don’t need any fancy equipment to know what makes a good teacher.

“Having a passion for your subject matter and enthusiasm for students,” says Wu. “That’s about all you need.”